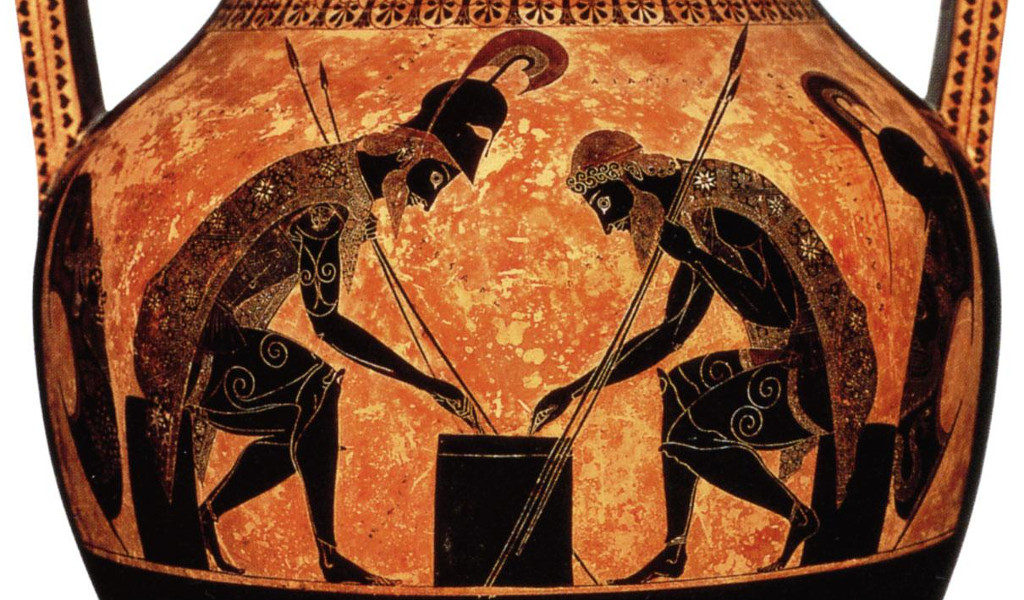 Play, a seemingly futile activity, is ubiquitous in human cultures and very widespread in the animal kingdom, which suggests it serves an important purpose

Update: this blog post was expanded into a paper with more explanations and additional experiments.

In this post, I’d like to illustrate how auxiliary tasks can be beneficial for machine learning. I’ll first define this notion, provide examples and show how these tasks are usually incorporated in the mathematical formulation of deep learning problems. I’ll then propose an alternative approach and present first experimental results for this approach.

In machine learning, auxiliary tasks are tasks we try to accomplish with the sole objective of better performing one or several primary tasks. This situation, referred to here as auxiliary learning, contrasts with multitask learning1, for which we are genuinely interested in accomplishing well all tasks, and single task learning, for which only one task is considered.

Let’s look at a striking example (Caruana et al., 1996) based on the Medis Pneumonia Database. This database contains 14,199 cases of patients diagnosed with pneumonia and hospitalized. It includes:

Rich Caruana and his colleagues’ primary task was to identify patients that were more likely to survive and should then not be hospitalized. In this context, the lab results, available only after hospitalization, couldn’t be used as inputs. However, it was still possible to take advantage of them. Rich Caruana and his colleagues tried, as an auxiliary task, to predict the lab results based on the basic measurements. They thus reduced the error rate for their primary task by 5-10%.

Auxiliary learning has often been successfully applied in other settings, such as in the examples below:

Table 2. Auxiliary learning has been successfully used in a variety of settings

For the sake of clarity, let’s consider only the case of a single primary task and a single auxiliary task (generalizing to an arbitrary number of primary and auxiliary tasks is straightforward). Let’s suppose further that these tasks correspond to the minimization of a primary loss and an auxiliary loss .

In the context of deep learning, the standard approach2 is to use a single neural network for both tasks, with shared layers followed by task-specific layers, and to apply a gradient descent-based method to minimize the weighted sum of the two losses .

The corresponding gradient is .

The underlying intuition is that minimizing will lead to more meaningful representations in the shared layers and that these representations will be leveraged by the layers specific to the primary task.

In the standard multitask approach, is a constant value3. Its purpose is to balance the primary task and the auxiliary task. corresponds to single task learning whereas increasing gives more and more influence to the auxiliary task.

The approach described above has provided very good empirical results. However, an auxiliary task may be unhelpful or even harmful for the primary task. The latter case, which is called negative transfer, is a central challenge of auxiliary learning.

Moreover, using a weighted average of and suggests we’d be willing to tolerate a higher value of if it helped sufficiently decrease . On the contrary, reducing the auxiliary loss is only looked for to the extent this contributes to reducing the primary loss.

To mitigate negative transfer and better reflect the fundamental asymmetry between the primary loss and the auxiliary loss, I suggest substituting with:

Otherwise said, is the projection of on the half-space of vectors whose cosine similarity with is positive. If a critical point of hasn’t been reached yet (i.e. if ), this ensures that will decrease if the learning rate if small enough.

Comparison to unweighted and weighted cosine

This approach, referred below as projection, is analogous to two methods, unweighted cosine and weighted cosine, recently proposed for the same purpose (Du et al., 2018). Yunshu Du, Wojciech Czarnecki and their colleagues also suggest to adjust :

If and form an acute angle, both projection and unweighted cosine leave unchanged whereas weighted cosine reduces its norm with the cosine similarity of these vectors. In particular, weighted cosine strongly shrinks when it becomes almost orthogonal to .

If and form an obtuse angle, both unweighted cosine and weighted cosine just ignore . In contrast, projection only negates the component of which is collinear to .

Even if projection and unweighted/weighted cosine are similar, their motivations are different:

Let’s now look at some experiments. They were performed with Tensorflow and you can find the corresponding notebooks and additional results on GitHub.

We start with a minimalistic example to illustrate how substituting with gives priority to the primary task while still allowing progress on the auxiliary task.

The solution of this problem is of course and we try to reach it by using a gradient descent-based algorithm starting from point with .

We can see the corresponding trajectories with the Adam algorithm (learning rate: 0.01, ) on Figure 4 and observe that:

With this example, projection, unweighted cosine and weighted cosine allow to find the correct solution but the convergence is notably quicker with projection (this is also the case for other starting points).

Figure 5 shows the trajectories with the vanilla gradient descent algorithm (learning rate: 0.01) and tells a different story. With unweighted cosine and weighted cosine, the point now stops on the unit circle far from (1, 0). This is because, in the absence of momentum, it eventually stays on the side of the unit circle where and form an obtuse angle. The auxiliary task is then never taken into consideration anymore. A similar behavior can be seen with other starting points.

In summary, the proposed method works as intended with these toy examples: it helps accomplish both the primary task and the auxiliary task while giving precedence to the former.

Experiments on a real dataset

The following experiments are based on the CelebA (or large-scale CelebFaces attributes) dataset (Liu et al., 2015) and inspired by (Zhang et al., 2014). The CelebA dataset contains many face images annotated with 40 binary attributes such as Attractive, Young, Eyeglasses or Black Hair, and the locations of 5 facial landmarks : left eye, right eye, left mouth corner, right mouth corner and nose.

Figure 6. Examples of CelebA images and their 40 x 40 downsampled gray-scale versions with green dots on the 5 facial landmarks

The primary task for these experiments is to determine whether a face is attractive (or at least attractive in the annotators’ eyes) and the auxiliary task is to locate the facial landmarks. The corresponding losses are the cross entropy error function and the average quadratic error.

Figure 7. Convolutional network with 4 convolutional layers interleaved with 3 max-pooling layers, a shared dense layer, and a final dense layer specific to each task

The pictures were downsampled to and converted to gray-scale to make the tasks more challenging and reduce computation time. 10000 of them were included in the training set, the validation set and the test set. I used the neural network depicted on Figure 7 as in (Zhang et al., 2014) and trained it with the Adam algorithm and early stopping. 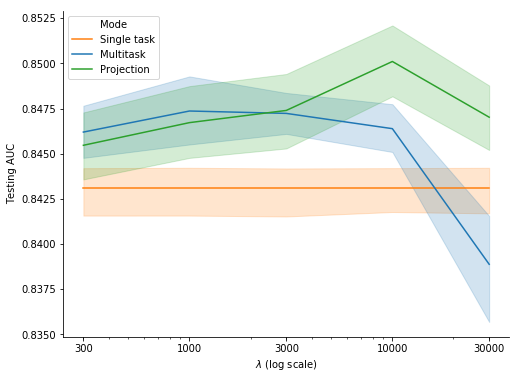 Figure 8. Testing AUC for single task, multitask and projection and 5 values of \(\lambda\) (10 runs for each combination). The bands around the lines on this chart and the next ones correspond to the 95% confidence interval

Figure 8 shows the testing AUC for the primary task with single task, multitask and projection and various values of : 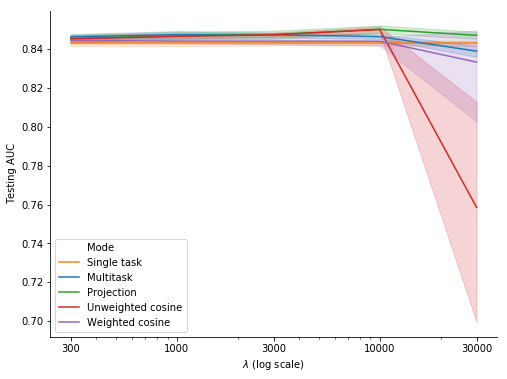 Experiments on a synthetic dataset

The last series of experiments follows (Chen et al., 2018) and uses a synthetic dataset to control the adequacy of the auxiliary task.

The primary task and the auxiliary task consist in approximating respectively and with the quadratic loss function where can be equal to:

For the input data (i.e. ), the training set, the validation set and the test set include respectively 1000, 1000 and 10000 vectors whose elements are generated IID from . Moreover and as opposed to the previous series of experiments, the training sets are distinct for the primary task and the auxiliary task. If these sets were the same, the auxiliary task wouldn’t add any value when .

Figure 10. Multilayer perceptron with 4 shared layers and an output layer specific to each task, all of them being of size 100

As (Chen et al., 2018), I used the vanilla neural network depicted on Figure 10, which I trained with the Adam algorithm and early stopping. 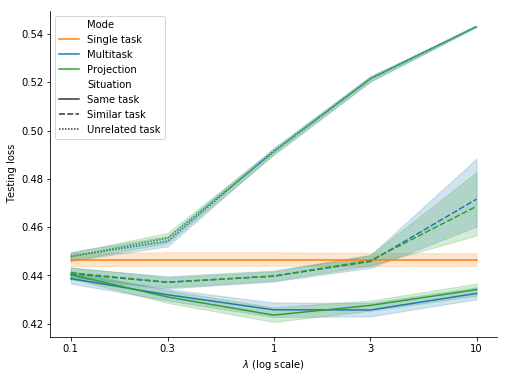 Figure 11. Testing loss for single task, multitask and projection for 5 values of \(\lambda\) (20 runs for each combination)

In contrast to the previous series of experiments, Figure 11 suggests projection has no added value compared to multitask. This difference may result from the fact that the primary task and the auxiliary task don’t share here the same input data. As a consequence, at each optimization step, is less related to and might then be too noisy to help properly adjust it. Therefore I tried substituting with an exponential moving average of for adjusting . With a smoothing constant , is then given at each optimization step by: 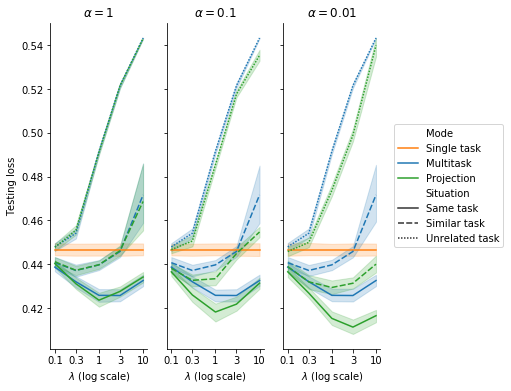 Figure 12. Testing loss for single task, multitask and projection for 5 values of \(\lambda\) and 3 values of \(\alpha\) (20 runs for each combination)

Figure 12 shows the same results as Figure 11 for 3 values of . With and even more with , projection yields clearly better results compared to multitask for all 3 situations5. Figure 13 zooms in on the case , for which unweighted cosine and weighted cosine provide better results than multitask and projection only when the primary task and the auxiliary task are unrelated. 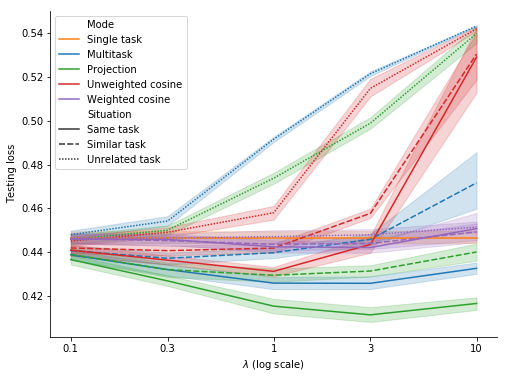 Figure 13. Testing loss for single task, multitask, projection, unweighted cosine and weighted cosine for 5 values of \(\lambda\) and \(\alpha = 0.01\) (20 runs for each combination)

In this blog post, I proposed a simple and intuitive method to mitigate such risk of negative transfer. I tested it in a few basic scenarios, in which it brought moderate but statistically significant gains over the standard multitask approach. This is a promising start but more diverse and elaborate experimental settings would be necessary to draw general conclusions on this method’s relevance or compare it with its alternatives.

Many thanks to the authors of the inspiring articles listed below and the developers of the great tools used for this post: Tensorflow, the SciPy ecosystem, Seaborn, Google Colab, PlotNeuralNet and Jekyll. Many thanks as well to Sebastian Ruder for his valuable feedback.

Written on February 17th, 2019 by Vivien
comments powered by Disqus